Versace Eros Eau de Toilette fragrance is an oriental woody floral that has top notes of bergamot, cardamom, and Sicilian mandarin; middle notes of rosemary, lavender, geranium petitgrain, and juniper berries; base notes of ambergris, sandalwood, and tonka bean. I really like this scent because it’s not too strong or overpowering but also lingers for hours after you apply it. It smells fresh and clean with just enough sweetness to make it memorable without being cloying. The price point isn’t bad either considering how well the scent lasts on your skin throughout the day.

A good Versace Eros review must first understand Eros the god. Son of Aphrodite, the goddess of love and beauty, Eros is an expression of male sexual power and fertility.

This fragrance from Versace was launched in 2013 and was envisioned as the aromatic expression of the raw sexual energy of Eros. Released with a female counterpart, Eros for Men was the first male fragrance to be released by Versace in five years. “Eros is truly the DNA of the House of Versace”, said Donatella Versace, “We have a Greek motive making us think about ancient Greece, antiquities, and mythology, while the turquoise color represents the Mediterranean. That is Versace!”.

Eros was inspired by and deeply connected with Greek mythology. The aim of this edition is to reveal and release unrestrained passion and to accentuate desire. The fragrance was named after the Greek god of love and the son of goddess Aphrodite – Eros. Inspiration by ancient Greece has lasted since the time when Gianni Versace raised his fashion empire and took goddess Medusa as a symbol of the brand to adorn numerous products of the house, among them also the new flacon of men’s fragrance Eros.

The new perfume Eros is the first in the past five years to be launched and aimed at men. Donatella Versace’s desire was to fit the fragrance into the concept of the Versace brand and to depict the style and significance of long-lasting design, quality and popularity. “Eros is truly the DNA of the house of Versace” – explains Donatella. “We have a Greek motive making us think about ancient Greece, antiquities and mythology, while the turquoise color represents the Mediterranean. That is Versace!”

Eros was created by Aurelien Guichard of Givaudan and it was announced as fresh, woody and slightly oriental. The fragrance includes mint oil combined with green apple and Italian lemon. Warmth is provided by tonka mixed with Venezuelan ambroxan and geranium flowers giving a fougere twist to the fragrance this way.

Flacon of the new fragrance for men Eros is created of turquoise color glass with head of Medusa on the body of the bottle and on its top. The fragrance is available as 50 and 100 ml EDT, along with accompanying perfumed body care products. Face of the advertising campaign is Brian Shimansky, while photographers are Mert & Marcus. Donatella wanted a man-gladiator for the new campaign, who is fighting for what he wants, fighting for his goals. “This is a fragrance for a man who is his own master. He is a hero: a man who defends their ideas and goals.” – stated Donatella Versace. 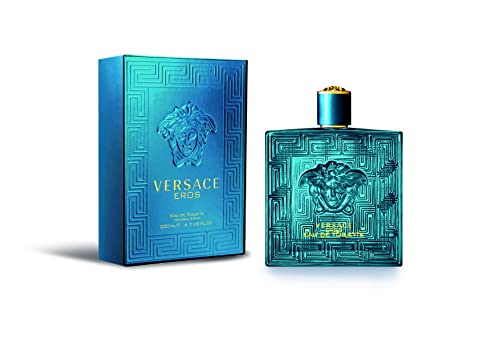 Versace Eros is a fragrance for a strong, passionate man, who is master of himself. Eros interprets the sublime masculine through a luminous aura with an intense, vibrant, and glowing combination of fresh mint leaves, Italian lemon zest, and green apple.

For a Versace Eros* review, it’s a must to discuss the scent notes. The scent opens with a strong blast of mint, green apple, and lemon. After the initial spritz fades, the aromas move to the heart, bringing forth tonka bean, geranium, and ambroxan. Finally, the fragrance settles on a base of Madagascan vanilla, vetiver, oakmoss, Virginian cedar, and Atlas cedar.

In this Versace Eros review, we can safely say that this eau de toilette has a truly impressive performance. The initial projection is huge and is matched with just as impressive sillage and projection.

The bottle, designed by Donatella Versace herself, is a masterpiece of decadence.

A block of azure blue glass contains the fragrance, adorned with Greek frieze motifs surrounding the central image, a depiction of the head of Medusa.

It’s crowned by a blue topper, gold on the top and with another image of the head of Medusa.

Where Can You Buy Versace Eros Perfume?

What is the price of Versace Eros?

The price of the perfume depends on the size and weight of the bottle. A 100ml bottle can be picked up for just a little above the average cost of a cologne.

Which scents are similar to Versace Eros?

Versace Eros for Men EDT acts in many ways like a gourmand, making it quite a rarity in the male fragrance market. This immediately recalls Givenchy’s Irresistible for Men – another gourmand. Though the two are still quite distinct.

Can you wear Versace Eros everyday?

The blend of mint and vanilla notes make Versace Eros appropriate for daytime use. While it is certainly a masculine scent, it is on the lighter end of the spectrum. Though light, it has a strong scent, so be careful if you decide to wear it to work or in other professional situations

Where Should You Wear It?

It’s both mature, yet playful. Thanks to its impressive projection and sillage it’d be great for a club or date environment, but office use may be risky if you want to avoid choking your co-workers.

In terms of seasonal considerations, Eros for Men is best suited to more temperature conditions, as hot weather can bring out an undesired sweetness in the scent.

Versace Eros Eau de Toilette for Men was created by Frenchman Aurélien Guichard. Born in Grosse, widely regarded the capital of perfume, the world of fragrances was never far from his life, even in childhood.

Versace Eros opens with a strong, cooling burst of mint.

His grandparents had made a living producing roses and jasmine for perfumers, while his father, Jean Guichard, was a perfumer. Aurélien studied at Paris’ legendary Givaudan School and followed in his father’s footsteps.

He has worked for a diverse range of perfume houses, from Bond No. 9 to Davidoff, Robert Piguet, and Ego Facto.

His career has taught him many lessons already. Explaining the mantra that guides his work, he said: “To have a clear olfactory goal, to bring excitement to life, to create perfumes that people want to use and share, and simply to be happy.”

According to Donatella Versace, Eros for men is “a fragrance for a man who is his own master. He is a hero: A man who defends their ideas and goals.” That tells us about what sort of personality this fragrance suits, but what about what age man this is for?

It dries down after about two hours, leaving the base notes of vanilla, cedarwood, oak moss, and vetiver. Vanilla is a dominant scent here, and will linger for up to 12 hours, depending on your personal chemistry and activity level.

Hence, If you are looking for a perfume that is passionate, vibrant, and impressive then Versace Eros may be the fragrance of your dreams. This iconic scent offers notes of grapefruit, bergamot leaves, lavender buds, ginger root mixed with cardamom pods. The unique blend creates an unforgettable aroma that will make people stop in their tracks to ask what cologne you are wearing. When it comes time for your next shopping trip come visit our store where we have all of these scents on display so you can find out which one suits your personality best.

The 10 Best Versace Perfumes For Women

We will be happy to hear your thoughts